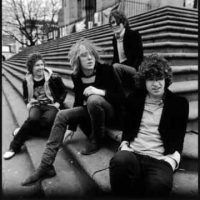 Favorite
Rookie
remove these ads
There are two main covers of Crazy by Gnarls Barkley out there. The one from blogotheque (on the streets of Paris) and the one from BBC Radio 1 Live Lounge. For the first one keep the chords as is. For the second one, transpose two half steps (-2) down.
remove these ads

tune your ukulele
+8
-1
SPEEDSPD
0
1
2
3
4
5
remove these ads
This arrangement for the song is the author's own work and represents their interpretation of the song. You may only use this for private study, scholarship, or research. UkuWorld and its derivatives do not own any songs, lyrics or arrangements posted and/or printed.
This arrangement was downloaded for free on UkuTabs.com:
https://ukutabs.com/t/the-kooks/crazy-gnarls-barkley-cover/
remove these ads

There are two musical groups with the name The Kooks: 1. British indie rock band - formed in Brighton, England, United Kingdom in 2004. The band currently consists of Luke Pritchard (vocals, guitar), Hugh Harris (guitar), Peter Denton (bass) and Nick Millard (drums). Nick is currently filling in for Paul Garred due to a recent arm injury. They have released three studio albums; their 2006 debut Inside In/Inside Out peaked at number two on the UK Albums Chart, and their 2008 follow up Konk reached number one.
All songs by The Kooks